While Christmas is not an official holiday in Saigon, the Vietnamese can’t seem to stop themselves from making it amazing. Vietnam has a thirst for international culture, and the way they celebrate Christmas makes the average westerner seem like a Grinch. Below are five reasons to love Christmas in Vietnam.

1) You Don’t Have to Wear Five Layers

Christmas in Vietnam is not cold. That’s right Santa, you can officially take your clothes off (or just the first seven layers of it). It means you can enjoy the gorgeous Christmas celebrations while only courting a slight breeze and crisp, fresh air.

You can sing, dance, and go to all your favorite places without having to worry about freezing or bringing a sweater and jacket everywhere. Flip flops, shorts, and half-buttoned shirts are welcome. Metropolitan hubs like Saigon and Hanoi are one-hundred percent decked out in Christmas lights and decorations. Expect to get lost in a kaleidoscope of lights and colorful trees. Many American tourists say that Christmas in Vietnam reminds them of Christmas in the Midwest in the eighties. We’ll take that. But seriously speaking, Saigon probably is never more beautiful than it is during Christmas.

Christians can also expect to see the standard nativity statue gallery spread across the city. Mary, Joseph, Baby Jesus, and all the Shepards and their animals make the annual stone cameos. The Notre Dame Cathedral in Saigon is especially decorated and crowded during Christmas. 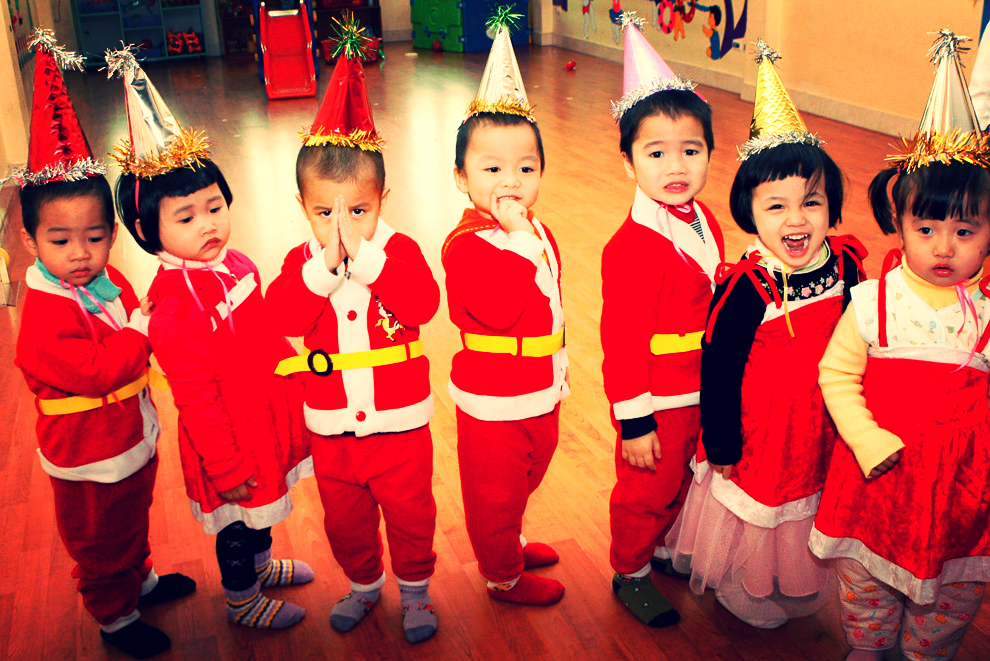 Any holiday is always a fantastic occasion for dressing up. In addition to Christmas lights and giant candy canes, also expect to see hundreds of little Santas strolling about Saigon and Hanoi. Kids in Vietnam, like kids almost everywhere, believe in Santa Claus. They believe in him so much apparently that they have decided to pretend to be him as well.

If your kids are not inclined to dress up as a fat, seventy-year old, basket of joy, you can pay for someone else to do it. There are plenty of companies available for hire with someone dress up as Santa Claus and deliver presents to your house at midnight. A great way to keep the dream alive for the little ones (at your discretion, of course).

Since most of Vietnam is Buddhist, the emphasis is more on the festivities of Christmas Eve than the religious significance of Christmas. And the festivities are amazing. Thousands flock to the city center and huddle around the cathedral to observe holiday celebrations. Citizens also gather together with family and friends for large parties that involve spectacular feasts, confetti showers, and plenty of song.

Common things you would expect in the west, like Secret Santa exchanges, occur as well. Of course, there are still Christians in Vietnam. As expected, they attend a large midnight mass at a church, and then return home for a family dinner. Common Christmas dishes include Christmas pudding, turkey, and chicken soup. As Vietnam was a part of the French empire, many traces of French influence still remain in the way it celebrates Christmas. The most ostensible case of this is the Christmas Eve meal called “reveillon,” the long dinner held before Christmas Day.

It typically consists of luxurious dishes like lobster, oysters, escargot, and foie gras. Much better than just turkey. The desert, called the “buche de Noel,” is a chocolate cake in the shape of a log. Not only is it extremely delicious, but it is also one of the most popular Christmas gifts. Why go through the drudgery of finding out what everybody wants for Christmas when you can just give them a giant, chocolate cake?