Disclaimer: the opinions expressed herein are that of HSC Securities and not of VietnamAdvisors. This is NOT a solicitation to buy or sell securities.

MAIN TAKEAWAY – A robust performance in Q1 FY2016 with a 58% y/y increase In pre-tax profit on the back of a 6.5% YTD credit growth. This is the strongest Q1 performance over the last 6 years. For FY2016 VCB targets 10% pretax profit growth while HSC forecasts 29% y/y growth. They also confirmed a 10% cash dividend will be paid for FY2015. The AGM also passed the 35% stock bonus and 10% private placement proposals. VCB will likely return to normative growth this year with decent prospects of a y/y fall in provisioning and low NPLs.

ACTION – Maintain Outperform. VCB is now trading at a forward P/B of 2.05x. More reasonable valuation than we have seen for some time given its best of breed status and emerging role as the leading retail bank also. Sector is out of favour right now but the stock clearly has several very strong positive catalysts.

VCB (HSX – Outperform) held an AGM and here are our main takeaways;

FY2015 audited numbers came with better prudential ratios, lower NPL and higher CAR. We have discussed the FY2015 results previously and here simply note that from the audited FS, NPL ratio arrived at 1.84%, or lower than the 2.01% estimate of unaudited ones accounts. While CAR increased to 11.04% vs. 10.9% reported earlier. No changes to the P&L numbers from the previous numbers.

Ratio of short-term funding used for long-term lending was announced at 24.9%, higher than the previous 18% estimate. However, this is still much lower than the current cap of 60% and also well below the proposed amended cap of 40% in the draft amendment of Circular 36. This means VCB still has plenty of room to expand medium & long term lending of it so wishes. Yet VCB has said that it has its own internal standards to control liquidity risk; and just plan to rise this ratio to 25.3% for FY2016.

VCB again stated any amendments of Circular 36, won’t affect then – This given its low exposure to real estate lending. Total lending to the real estate sector accounted for just 8% of its loans book, equivalent to around VND30,900 billion. And as said before in the analyst meeting, if risk-weight factors for this sector are increased from 150% to 250% as we expect once Circular 36 is amended, VCB estimated its CAR would drop by 50 bps only.

VCB announced a plan to divest bank holdings. The bank previously stated that it has been allowed to keep its holdings at MBB and EIB. With the holding in EIB deemed to be important for that bank’s restructuring purposes as it gives the SBV a voice in the bank through VCB’s holding. However, we may expect a divestment of the OCB (a 5.07% holdings) and SGB (a 4.3% holdings) this year. Even so these stakes are very small. So, no significant P&L effect is expected from any divestment.

Dividend policy for FY2015 – VCB will pay a 10% cash dividend for FY2015. The AGM also approved the plan to increase chartered capital by 48.5%, from VND26,650 billion to VND39,575 billion. The planned increase in capital to be implemented in two phases, via a stock bonus and then a subsequent private placement as follows:
Phase 1 – VCB will announce a 35% stock bonus – The stock bonus worth VND9,327 billion would be funded by the share premium and retained earnings. Following this, chartered capital will increase by 35% to VND35,977 billion. There is no specific timeline for this issuance; yet we expect it will be done at the end of Q2 or early Q3.

Phase 2 – VCB will execute a 10% private placement. The issuance targets mainly foreign strategic buyers. Maximum number buyers for the placement has been set at 10. The stock will also be locked for 1 year which would exclude most financial investors. Timeline of the offering to be subject by approval of competent agencies and negotiation between VCB and related parties. However, the BOD of VCB is confident that it will complete the private placement within FY2016. No guidance on pricing but some form of premium can be expected.

The purpose of the issuance is to help VCB to meet the CAR requirements under the Basel II standard. Prior to the private offering, VCB might consider subordinated bond issue to increase Tier II to foster its CAR. For FY2016, HSC revises up our projections, with assumption of higher credit growth given their decent Q1. We now call for a 29% y/y growth in pre-tax profit vs. the previous projection of 25% y/y growth. Our new rationale is based on the following assumptions;
1. Credit growth at 21% y/y. almost the same as SBV sector targets. Given a low LDR, plus an improved CAR post private placement which should enable VCB to grow credit faster.
2. Deposit growth of 18% as VCB is happy to allow a modest increase in its LDR.
3. NIM to expand by 6 bps. VCB concerns on the recent increase in deposit rates are noted.

Yet, we think even assuming a higher CASA weight, the cost of funds won’t be affected much. We think NIM will still trend higher given; (a) higher LDR; (b) full-year effect of high yielding US$ bond holdings; (c) benefit from a shift in the lending structure as preferential interest rate charged for some new loans in the first year drops out and subsequently higher interest rates apply; (d) retail lending increases by another 40-50% y/y. We estimate a 1% increase in the weight of personal loans would lift NIM by 2 bps.

The retail business is a key part of the puzzle here although we have to say that VCB retail lending product is not significantly better than peers. For example they no longer provide overdraft service, a popular retail product and still appear to be excessively conservative in controlling the loan to value ratio for consumer lending. Even so they are becoming the top player in retail segment thanks to (1) low lending rate offers given low funding costs and (2) superior customer base driven by their best of breed credit card business (3) their peerless reputation. Hence growth of 40-50% y/y in this segment is very likely

5. We then assume non-interest income rises by 6.5% with fee income and other income as the main drivers.

7. We then estimate that operating expense rises by 22.1% to VND10,139 billion on higher staff compensation costs (+25% y/y) as profits recovers. We also assume VCB will open 6 new branches and 20 new transaction offices in FY2016. 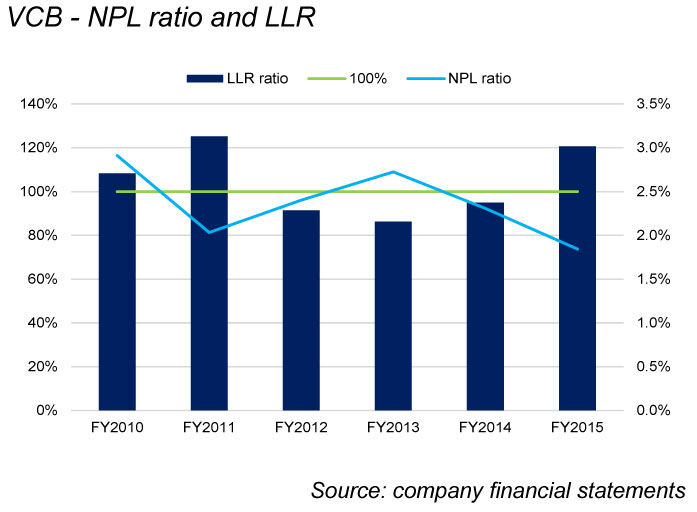 With this we forecast that pretax profit will rise 29% to VND8,805 billion generating an EPS of VND1,631 taking dilution into account.

Investment thesis – Reiterate OUTPERFORM on best of breed status – VCB remains our top pick in the banking industry given its strong core business enjoying the lowest funding cost, superior asset quality and dynamic income structure. And with provisioning likely to slow down going forward which is rare amongst listed banks here we forecast pretax profits growth rates could even accelerate from now on. The proposed 10% Tier 1 capital increase will lead to some dilution but in the scheme of things this is not a major concern. And unlike other banks VCB will easily manage the transition to Basle 2. And won’t see much appreciable effect from C36 amendments either. Then at the current price, VCB is trading at P/B forward of 2.05x. This compares favorably to a peak P/B valuation of 3.2xs during the rally last year. Reiterate Outperform. 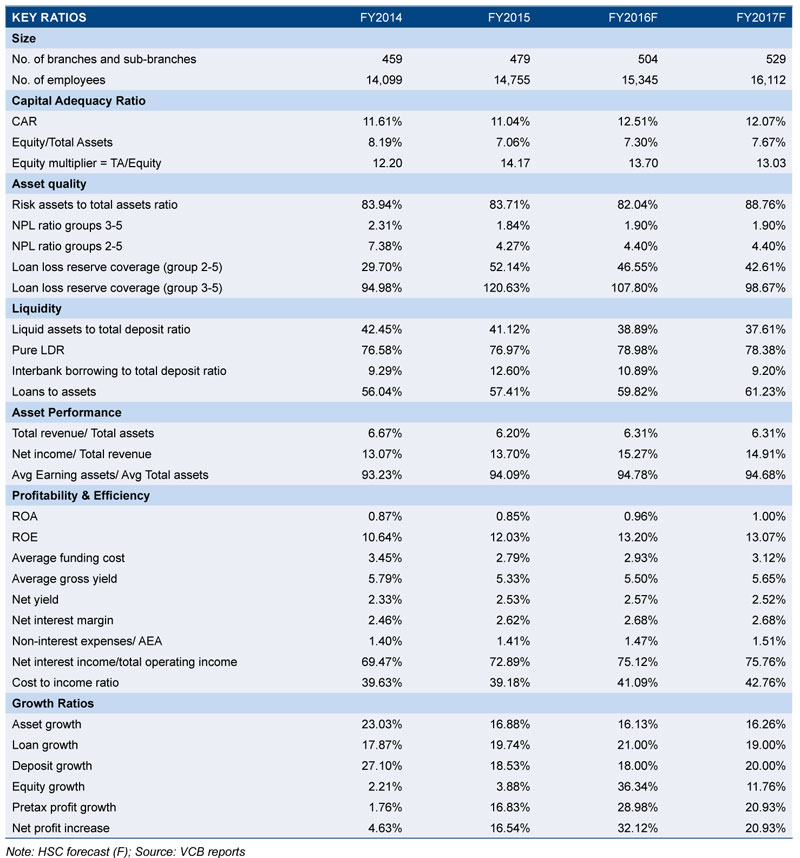 Copyright 2015 Ho Chi Minh Securities Corporation (HSC). All rights reserved. This report has been prepared and
issued by HSC or one of its affiliates for distribution in Vietnam and overseas. Opinions, estimates and projection expressed
in this report represent the current views of the author at the date of publication only. They do not necessarily
reflect the opinions of HSC and are subject to change without notice. HSC has no obligation to update, amend or in
any way modify this report or otherwise notify a reader thereof in the event that any of the subject matter or opinion,
projection or estimate contained within it changes or becomes inaccurate. The information herein was obtained from
various sources and we do not guarantee its accuracy or completeness. Prices and availability of financial instruments
are also subject to change without notice. This published research may be considered by HSC when buying or selling
proprietary positions or positions held by funds under its management. HSC may trade for its own account as a result
of short term trading suggestions from analysts and may also engage in securities transactions in a manner inconsistent
with this report and opinions expressed there in. Neither the information nor any opinion expressed in this report
constitutes an offer, nor an invitation to make an offer, to buy or to sell any securities or any option, futures or other
derivative instruments in any jurisdiction. Nor should it be construed as an advertisement for any financial instruments.
Officers of HSC may have a financial interest in securities mentioned in this report or in related instruments. This
research report is prepared for general circulation for general information only. It does not have regard to the specific
investment objectives, financial situation or particular needs of any person who may receive or read this report. Investor
should note that the prices of securities fluctuate and may rise and fall. Past performance, if any, is no guide to the
future. The financial instruments discussed in this report may not be suitable for all investors. Investors must make
their own financial decisions based on their independent financial advisors as they believe necessary and based on
their particular financial situation and investment objectives. As this report is HSC’s property and not public information,
this report and any part of this report may not be copied, reproduced, published or redistributed by any person for
any purpose without the express permission of HSC in writing. Please cite sources when quoting. Any Party shall be
liable to HSC for any cost, loss or damage incurred by HSC or HSC clients as a result of any other breach under this
Disclaimer in accordance with law.
Tags
Commercial Bank , Dau Thi Van Anh , hsc securities , js commercial bank , Outperform , Research , Vietnam Advisors , vietnam banks , vietnam investment , vietnam markets , Vietnam news