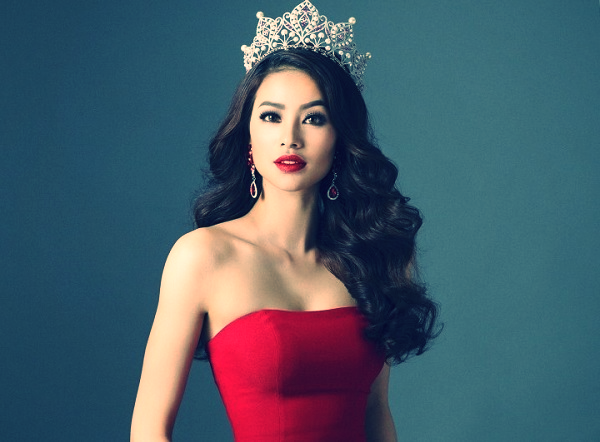 Miss Universe Vietnam 2015 just happens to be a professor.

While researching the best universities in Vietnam for a coming article, we came upon a fun fact. One of the lecturers at the Saigon College of Arts, Culture, and Tourism and is none other Pham Huong. For those unfamiliar, she was crowned Miss Vietnam 2015 and represented Vietnam in last year’s Miss Universe competition – the global counterpart of the renowned Miss USA competition that has produced household names like Nina Agdal and Olivia Jordan. It was previously owned by United States President elect Donald Trump.

She is also the first Vietnamese beauty pageant contestant in history to command a massive global following. For this week’s lighthearted fun segment, we uncover five things about Miss Huong, who is an ardent philanthropist, teacher, as well as a symbol of the new, vibrant Vietnam.

1) She Was Exceptionally Good in English

One of the largest roadblocks for Vietnamese Miss Universe contestants in the past was the English barrier. Miss Vietnam 2015 broke that barrier with her exceptionally confident delivery. Given that body language and expression play a large part in complementing physical beauty in the Miss Universe competition, judges were impressed by Pham Huong’s aggressively confident demeanor – something they noted was lacking in previous Vietnamese contestants.

2) She Was Born in Hai Phong Pham Huong was born in Hai Phong, Vietnam’s third most populous metropolis. The area, commonly known as the “City of Flame Flowers,” is a two hour drive from the charming culture hub of Hanoi. It earned its name from its streets, which are often studded with flame flower trees. The city is also known for its fiery spirit, as it is a hub for a large number of festivals throughout the year – the most popular one being the buffalo fights. Perhaps these things contributed to Miss Vietnam’s lively and active lifestyle?

Miss Vietnam is a reflection of the rising love and practice of sports in Vietnam. She studied martial arts in high school, and was so athletic that she was able to compete as the first runner-up in 2014’s Miss World Sport – a beauty pageant in the framework of the Winter Olympics in Sochi, Russia. She says her love for sports stems from her love in challenging herself in new ways. She finds those challenges frequently in sports and music. In addition to modeling and teaching, she has also worked as a professional dancer.

4) She Studied Marketing at Hungary

Miss Huong went to college in Hungary where she received her Bachelor of Arts in marketing. That degree clearly paid off, as her self-marketing skills landed her close to the top 15 in a Miss Universe competition that drew in contestants from 88 countries. Her wild success is another example of how strong marketing skills can be incredibly powerful in a socially-networked age. She captured the heart of 90 million Vietnamese viewers and accumulated 462,000 followers on her Facebook account that was based in Las Vegas, Nevada.

5) She is the Largest Fan Favorite in Vietnamese History Pham Huong was a consistent favorite throughout her time in Miss Universe. Missology, the world’s leading beauty pageant website, said ““Huong Pham is a consistent favorite. Everybody is talking about her and everybody is putting her in their list.” Huong communicated with fans consistently and nailed English interviews. She earned praise from names as distinguished as Ines Ligron, a french fashion and beauty expert who has worked with celebrities around the globe. In being a Vietnamese woman commanding strong authority over the global beauty and cosmetic stage, she follows the likes of Michelle Phan.

6) She Doubles as a Supermodel and Lecturer

Huong’s double life as a model and university lecturer puts her in the same league as Pietro Boselli, the mechanical engineering Ph.D who taught math and engineering at University College London while also dabbling as an Armani model. While Huong may not hail from academia, her experience as a global beauty and fashion ambassador for her country gives her invaluable experience in teaching the course material offered at the Saigon College of Arts, Culture, and Tourism.

Fans labeled her as “the most confident contender Vietnam has ever had at an international beauty pageant.” As a parting class act, she called on her legions of fans to support her best friend Clarissa Molina, Miss Dominican Republican, when she was disqualified before reaching the top 15. She also spoke out when the Miss Universe 2015 winner was incorrectly announced by host Steve Harvey – a gaffe that caused international commotion.