Disclaimer: the opinions expressed herein are that of Rongviet Securities and not of VietnamAdvisors. This is NOT a solicitation to buy or sell securities.

Back to normal routine

More profitable in 3Q2016
We have had a short call with CHP’s representative for a view on the impact of El Nino and La Nina on the Company’s operations. We learn that water level in A Sap river in Q3 has been in line with expectations and still matches the multiple-year average level for this period, allowing CHP to follows its operating plan closely. Q3 sales volume is expected at 124 mn kWh, up by 11% yoy and equivalent to 90% of total volume in the first half.

Outlook and valuation
A Luoi hydropower plant is located in the A Sap river basin of Thua Thien-Hue province. According to the climate pattern of the region, the rainy season only comes in the last quarter, with 55-70% of the annual rainfall occuring in the last 3-4 months of the year. Like we have mentioned above, the impact of El Nino on CHP has been negligible as compared to other hydropower plants in the South-Central and Highland. 2016 net income is forecast at VND246.3 bn or VND1,886 per share.

CHP is proved as a highly efficient hydropower plant with stable business results over the years. After the Company prolonged payment term and lower interest rates on its long-term debts in 2015, the Company found itself in ample for dividends payment. In fact, dividend payout increased from VND900 a share in 2014 to VND1,600 a share in 2015 and has been planned at VND1400VND1600 a share in 2016. Given its solid cash dividend policy, CHP is a worthy consideration for long-term investors.

Using P/E and EV/EBITDA methods, CHP’s reasonable price is estimated at VND23,400 per share, 13.7% higher than the closing price on Sep 22nd. We recommend ACCUMULATE in the INTERMEDIATE-TERM for CHP.

Selling prices to go throught the off-peak season in3Q
For CHP, selling prices are often at their lowest in Q3 due to (1) a decline in contracted price (Pc) to VND795 per kWh (the rest of the time is VND962 per kWh) and (2) low electricity prices in competitive market as a result of heavy rainfalls and thus ample supply from hydro power plants. We estimate that average selling price of CHP in Q3 can be as low as VND859 per kWh, a significant decrease from that of the first half.

Major shareholders diviestment
In late August and early September, two state-owned shareholders of CHP, i.e. EVN Ha Noi (11.25 mn shares or 8.93%) and Genco 1 (6.6 mn shares or 5.22%), sold shares of the Company at an average price VND19,900 per unit. Such divestment was implemented in accordance with the government plan to withdraw the influence of State Corporations from local companies.
The identity of the buyers remains unknown. However, from what we have uncovered, they are professional investors specializing in the power industry. If this is true, their investment in CHP could be either for strategic purposes or as a long-term holding. Therefore, we suppose this transfer will have negligible impact on the daily trading of CHP.

Transfer to list on HSX
The stock of CHP was delisted on HNX in Sep 23rd and can be traded on HSX starting Sep 29th. CHP is the largest listed hydropower company in terms of capacity and the second largest by chartered capital as well as total assets. Therefore, we expect the migration to the HSX will help improve the stock’s liquidity. 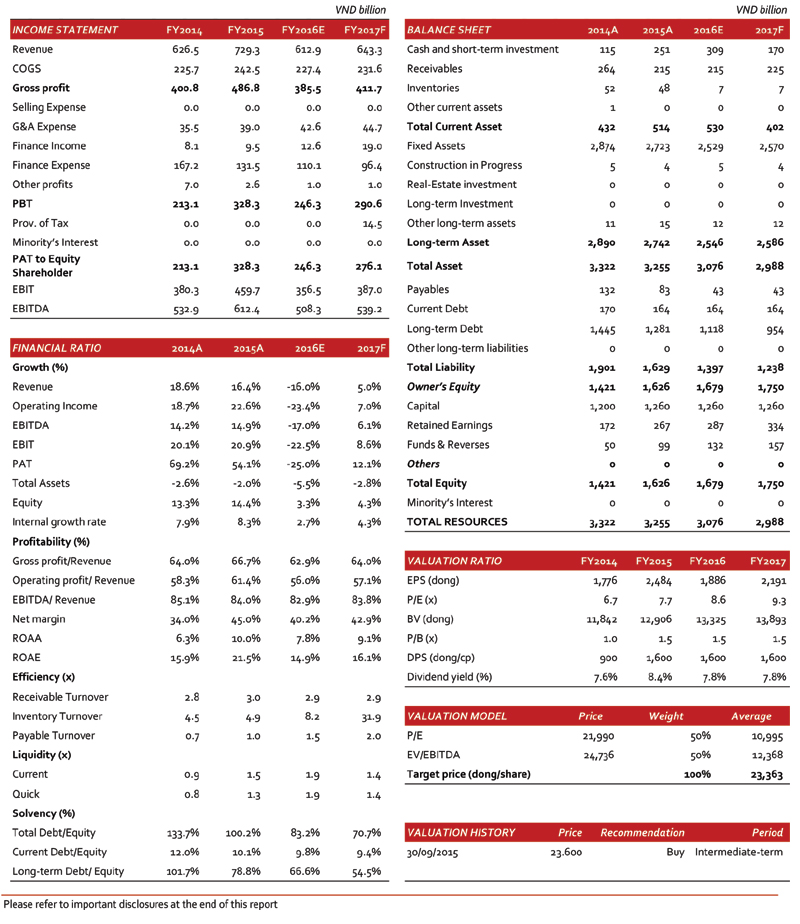 This report is prepared in order to provide information and analysis to clients of Rong Viet Securities only. It is and should not be construed as an offer to sell or a solicitation of an offer to purchase any securities. No consideration has been given to the investment objectives, financial situation or particular needs of any specific. The readers should be aware that Rong Viet Securities may have a conflict of interest that can compromise the objectivity this research. This research is to be viewed by investors only as a source of reference when making investments. Investors are to take full responsibility of their own decisions. VDSC shall not be liable for any loss, damages, cost or expense incurring or arising from the use or reliance, either full or partial, of the information in this publication.
The opinions expressed in this research report reflect only the analyst’s personal views of the subject securities or matters; and no part of the research analyst’s compensation was, is, or will be, directly or indirectly, related to the specific recommendations or opinions expressed in the report.
The information herein is compiled by or arrived at Rong Viet Securities from sources believed to be reliable. We, however, do not guarantee its accuracy or completeness. Opinions, estimations and projections expressed in this report are deemed valid up to the date of publication of this report and can be subject to change without notice.
This research report is copyrighted by Rong Viet Securities. All rights reserved. Therefore, copy, reproduction, republish or redistribution by any person or party for any purpose is strictly prohibited without the written permission of VDSC.
Copyright 2016 Viet Dragon Securities Corporation.
Tags
rongviet securities , vietnam business , vietnam hydropower , vietnam investment , Vietnam news