Disclaimer: the opinions expressed herein are that of RongViet Securities and not of VietnamAdvisors.  This is NOT a solicitation to buy or sell securities.

Brexit: The terror from within the EU and its affects on Vietnam

Today, global and Vietnamese financial markets’ movements demonstrated cautious and unexpected reaction facing 51.9% of vote for Brexit. According to Bloomberg’s statistics, GBP depreciated by 11%, reached the lowest point since 1985. Most of global market indicators decreased by 5 – 7%. Even in commodity markets, oil price also dropped by 5.1% to USD 47.56/barrel, strongest decline since 02/2016. In contrast, the capital flows into safe assets such as gold or US’s bonds. Majority of assessments provided the opinion that leaving EU will negatively affect UK’s economy with increasing inflation and depreciation of GBP in the future.

Because of the cohesion and interaction between macroeconomic factors, we believe that it is difficult to quantify the impacts of Brexit on Vietnam economy. Overall, Brexit is creating the anxiety sentiment for investors. As a result, it will firstly impact on capital flow and risk tolerance of major stock exchanges, rather than entities that directly operate the economy and businesses.

From macro perspective, the implicit impacts of the Brexit vote on Vietnam would be in the following aspects. It assesses the trade, economic growth, exchange rate fluctuations and the public debt. In term of trade, total export turnover of Vietnam to the UK is about USD 4.6 billion, accounting for ~ 3% of total exports and ~2.4% of GDP. It can be said, the UK is one of the biggest export markets of Vietnam enterprises in the EU. In addition, the trade growth from Vietnam to the UK has been stable at ~20% annually over the last 5 years. In the first 5 months of 2016, when debate on Remain/Leave vote is pushed to the extreme level in the UK, export growth from Vietnam to the UK market reached about 17%, a quite high growth compared to other markets. In our opinion, in the short term, the impact of Brexit vote on Vietnam trade would be insignificant. 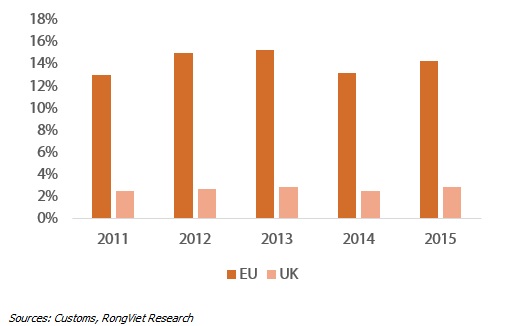 In the long run, it is hard to say that the Brexit vote will negatively impact Vietnam trade as it likely depends on trade policy when the UK decided to split from the EU. There is reason to believe that the UK could make trade transformation from the EU to Asia, in which, Vietnam with higher commercial connectivity could have opportunities to improve trade growth, possibly.

We do not expect an immediate impact on Vietnam economic growth in the short term, the economy is still operating normally, supporting by industrial production and consumer confidence. On the other hand, high public debt is a long-lasting risk for Vietnam, this risk could increase due to the appreciation of the yen recently. High public debt surely curbs economic growth and creates budget difficulties at least in the next few years.

Fluctuations in the currency pairs after the result of the EU referendum is quite interesting, the yen has strong rally while the dollar follows with slow and modest gain, the reaction of the CNY is quite weak after Brexit vote news with the depreciation about 0.6%. Exchange rates of some emerging currencies has been depreciated by 1-2%. Meanwhile, the dong exchange rate is quite stable and State Bank of Vietnam has made no move to adjust the central exchange rate. Based on those movements, we have less concerns about the exchange rate risk in Vietnam market. We maintain our forecast of a depreciation ~ 3% for the dong this year and exchange rate risk’ impact on stock investors should not be overstated.

Figure: Fluctuations of some currency pairs Would Brexit trigger a domino effect in Europe?

The most risk after the Brexit shock is that there would be further exits from the EU. This systematic risk could trigger another recession for our global economy. If happening, Vietnam economy as well as stock market would be probably tumble as what happened in the past. After the referendum in Britain, some political men in other EU countries as Netherlands and France expressed their request to organize a similar referendum in their countries but we do not think these requests could come into practice within one year. However, we do not bet the scenario of an immediate domino effect but the Brexit would hit the confidence of the remaining EU members. Although instability in the EU may further exist, we do expect global financial markets would turn back to its trajectory after the Brexit shock. Currently, all central banks have committed to give suitable monetary policy to fight against negative effects of Brexit when necessary. Some possible actions in leading central banks are that FED could delay her interest rate lift decision or that BOJ could continue his loosen monetary policy or BOE could lower his interest to stimulate the British economy.

This report is prepared in order to provide information and analysis to clients of Rong Viet Securities only. It is and should not be construed as an offer to sell or a solicitation of an offer to purchase any securities. No consideration has been given to the investment objectives, financial situation or particular needs of any specific. The readers should be aware that Rong Viet Securities may have a conflict of interest that can compromise the objectivity this research. This research is to be viewed by investors only as a source of reference when making investments. Investors are to take full responsibility of their own decisions. VDSC shall not be liable for any loss, damages, cost or expense incurring or arising from the use or reliance, either full or partial, of the information in this publication.The opinions expressed in this research report reflect only the analyst’s personal views of the subject securities or matters; and no part of the research analyst’s compensation was, is, or will be, directly or indirectly, related to the specific recommendations or opinions expressed in the report.

The information herein is compiled by or arrived at Rong Viet Securites from sources believed to be reliable. We, however, do not guarantee its accuracy or completeness. Opinions, estimations and projections expressed in this report are deemed valid up to the date of publication of this report and can be subject to change without notice.

This research report is copyrighted by Rong Viet Securities. All rights reserved. Therefore, copy, reproduction, republish or redistribution by any person or party for any purpose is strictly prohibited without the written permission of VDSC. Copyright 2016 Viet Dragon Securities Corporation.