Disclaimer: The opinions expressed herein are that of  RongViet Securities and not of VietnamAdvisors. This is NOT a solicitation to buy or sell securities.

In 1Q2016, the average input price was down by more than 36% yoy, higher than the decrease of output price. As a result, NT2’s gross margin significantly increased to 33% in 1Q2016 compared with 17% in 1Q2015. Profit from operating business, excluding FX variation and other financial income, reached more than VND405 bn (+38% yoy).

The 4% appreciation of EUR against VND in the first quarter caused an unrealized FX loss of VND58 bn.

2Q2016: Keeping advantages
The average CGM (competitive generation market) electric price is expected to be higher in the second quarter due to (1) a shortage of output from hydro power plants. Because of severe drought, output from hydro power plants sharply slump in 1Q2016. The trend would prolong in the second quarter it is the peak time of dry season; and (2) Output demand, which is the second reason, would be higher in Q2 as a seasonal factor.

Outlook and valuation
NT2 has demonstrated its outperform operating result since officially generated in 2012. The success of NT2 is a synchronization of the plant’s favor location, sound corporate governance, experienced staffs and modern machine. For 2016, NT2 is expected to reserve high efficiency and improving profit margin. 2016 NPAT is forecasted at VND944.4 bn and diluted EPS is VND3,455.

After its second payment for 2015 dividend, which is 13% in cash and 4% in stock, we recommend “ACCUMULATE” for this ticker with target price of VND34,800.

Electrical load would grow 13% yoy in 2Q2016. Meanwhile, the severe drought would remain, especially in the Center – Highland and Southern provinces. Therefore, coal, gas and oil power would be prioritized to generate at high capacity.

Double benefit from weather condition as well as low input price in 2016
Although operated 13% higher than its capacity in 2015, NT2’s CEO believed that in case of requirement from EVN, NT2’s capacity would reach 6 bn kWh, i. e. 10% higher than 2015’s volume. Despite of that, in our base case scenario, we set a lower volume for 2016. The rationale is that electric supply would increase in 2H2016 due to (1) Higher output from hydro power plants when rainy season comes and (2) New power plants. Therefore, we estimate that NT2’s 2016 volume would equal to that of 2015, i. e. 5.5 bn kWh. Lower selling price, in fact, would not a negative signal to NT2’s profitability. Instead, profit margin from core business is estimated at 25.6%, higher than the margin of 22.2% of 2015. Excluding FX variation affect, operating profit would be more than VND1,345 bn (+11% yoy).

Project update: Liquid CO2 production from emissions
In the early of May, NT2 and Chemical Industry Engineering JSC. signed contract on Feasible Statement Consultant for the project. The documents would be transferred to NT2 in the early of Aug 2016. The CEO of NT2 said in a recent meeting with our analyst that the installed capacity was c. 50 tons per day. The project, if being approved, would take the company more than one year to fulfill required legal document as well as complete the construction. Therefore, it is not sooner than 2018 that NT2 could record revenue from the project. 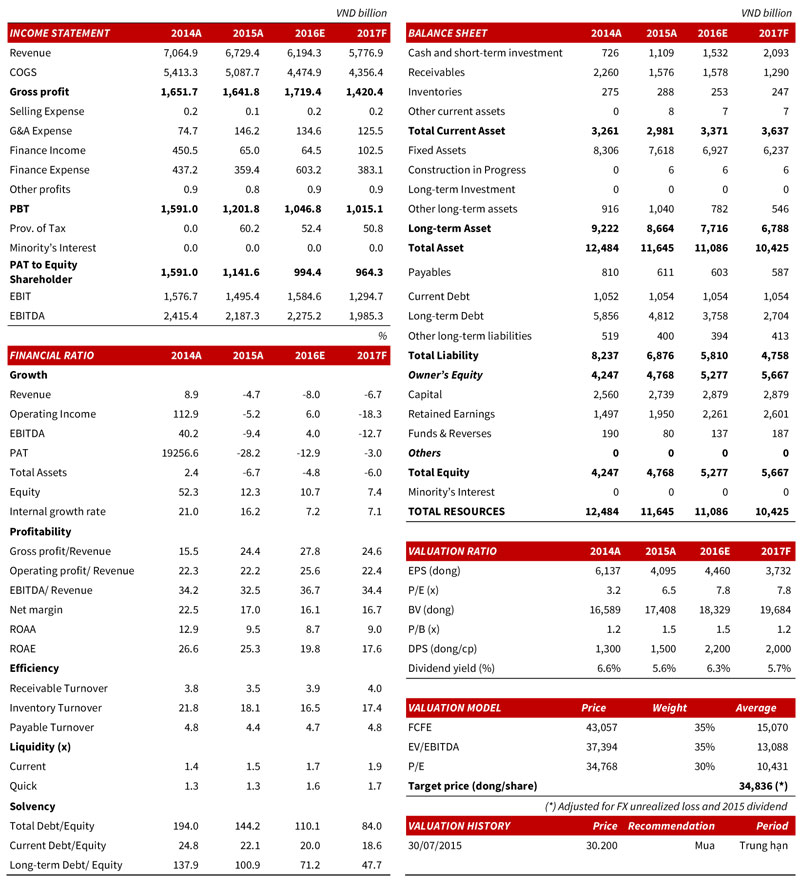 This report is prepared in order to provide information and analysis to clients of Rong Viet Securities only. It is and should not be construed as an offer to sell or a solicitation of an offer to purchase any securities. No consideration has been given to the investment objectives, financial situation or particular needs of any specific. The readers should be aware that Rong Viet Securities may have a conflict of interest that can compromise the objectivity this research. This research is to be viewed by investors only as a source of reference when making investments. Investors are to take full responsibility of their own decisions. VDSC shall not be liable for any loss, damages, cost or expense incurring or arising from the use or reliance, either full or partial, of the information in this publication.
The opinions expressed in this research report reflect only the analyst’s personal views of the subject securities or matters; and no part of the research analyst’s compensation was, is, or will be, directly or indirectly, related to the specific recommendations or opinions expressed in the report.
The information herein is compiled by or arrived at Rong Viet Securites from sources believed to be reliable. We, however, do not guarantee its accuracy or completeness. Opinions, estimations and projections expressed in this report are deemed valid up to the date of publication of this report and can be subject to change without notice.
This research report is copyrighted by Rong Viet Securities. All rights reserved. Therefore, copy, reproduction, republish or redistribution by any person or party for any purpose is strictly prohibited without the written permission of VDSC. Copyright 2016 Viet Dragon Securities Corporation.
Tags
business , Chemical , Engineering , financial income , foreign exchange , hydro power plants , invest in vietnam , Investment , Market , Power , Power generation , profit , Valuation , Vietnam , Vietnam Power