“All those who wander are not lost.” – JRR Tolkien

Zicasso is a luxury tour company offering the ultimate in vacationing. One of its latest premium getaways is a 20-day all-inclusive tour of Vietnam where you will be immersed into Vietnam’s culture, traditions and landscapes. Once you’ve landed from your flight on Vietnam’s rising aviation star VietJet, you will experience the beauty of opulent cities, the elegance of the French-inspired countryside, the vivacity of the people, and the layered flavors of the cuisine. The new Vietnam is not only a prime investment destination, but a gorgeous vacation hub as well.

1) A Beginning in the Paris of Asia – Hanoi. The 20-day tour takes you to Hanoi, Ha Long Bay (which offers a great cocktail cruise), Sapa, Hue, Hoi An, Nha Trang, Ho Chi Minh City, Mekong Delta, Cao Dai Temple and the Cu Chi Tunnels, and the far reaches of the north along the Chinese border. You will receive the expert services of a knowledgeable guide fluent in English, daily meals and transportation to each destination.

The trip begins in the capital city of Hanoi, also known as the Paris of Asia.  Hanoi gleams with thousands of years of history fused into the modern world. You will be met at the airport by a private transfer and taken to your hotel, allowing you the remainder of the day to rest and wander at your leisure. The city exudes a palpable energy to the atmosphere along the streets. Nights in the Old Quarter are some of the most charming you could have in your life. Millennials may find amusement in the city’s famous Harry Potter Cafe. The glitterati will love the city’s love the city’s abundance of fashion shows. You will enjoy tranquil places such as Hoan Kiem Lake, an incredibly beautiful area shaded by trees filled with legend.

2) A Detour to Spectacular Nature The grandeur of Vietnam is stunning.  Here are some highlights of the 20-day tour:

Each day, your guide will take you to the most notable landmarks of each city. You will see Vietnam’s iconic temples, statues, waterways with thousands of islands along the archipelago sculpted by the elements and time. You will boat through rising limestone karsts with the sea mist in your face, and enter the mysterious caves where the rock walls change color. You might also meet some of our planet’s most treasured wildlife, like the adorable Douc Langur.

The natural majesty of the interior cave formations will captivate you. In fact, the world’s largest cave, whose inner walls are more exclusive than the peak of Everest, is located in Vietnam. If you are adventurous, you should also ask your guide about a luxury cave dining experience. Vietnam is one of the only countries where such indulgences are offered. You will still have plenty of afternoon and evening time to enjoy the city on your own or with members of the group.  The choice is yours.  Just don’t miss the morning meetup with your guide.

3) Glimpsing Into a Special Kind of World. 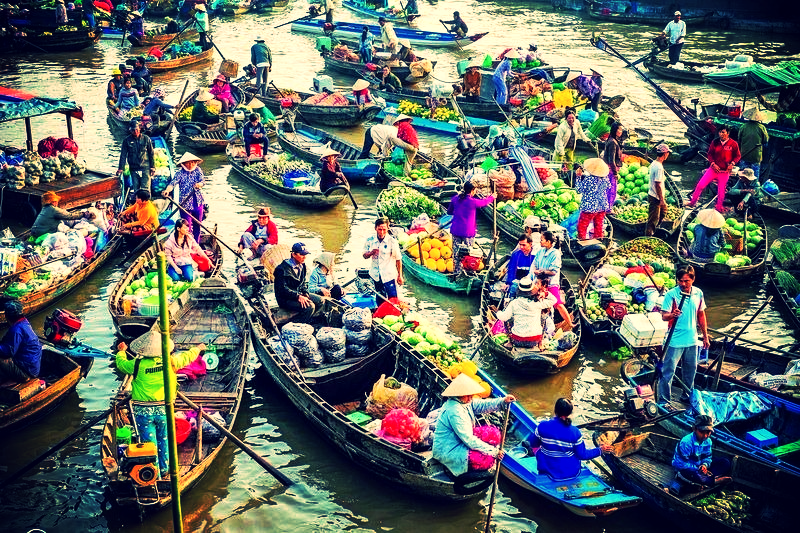 Several days of the trip give you a unique view of Vietnam away from the city allowing for different types of discovery, such as the ethnic market around Lao Cai.  The market is known for its visits from the Flower H’Mong villagers who come from all areas of the mountainside to sell, barter or buy handmade items. The sheer breadth of life and color that fill the air gives the sense of a cultural wonderland.

The colorful textiles that the women and children wear and vend are diverse, unique, and elegant, fitting with their particular cultures. Their crafts represent some of the best ethnic artisan work in Vietnam. In the evening your chartered boat will anchor along a quiet cove where the motion and sound of the tide brushing against the rocks will lull you to sleep.

Vietnamese children and adults in the stunning fields of Sapa are excited and curious to see new faces and warmly welcome visitors into their villages. Approach them with an open mind, and and you will have new friends with hearts of gold.  Their valleys are also some of the most beautiful green formations in the world, lying beneath a sky that blooms as blue as the Mediterranean.

4) Saying Hello to an Emperor.

The Imperial City of Hue on the Perfume River and Thien Mu Pagoda is a sight to behold. You will visit the tomb of Emperor Minh Mang, an architectural masterpiece within a six-square-mile complex constructed in the 19th century. The beauty of the complex is not just in its structural genius, but also in its tranquility.  On the northern banks of the river are seven tiers, each representing a different step on the path to enlightenment.

As you walk up, take a pause and breathe in. If you close your eyes, it might seem like all sound and movement in the world has come to a stop with you. Moments like these are precious. The trip is as much a gift in personal growth as a balm for the senses.

Leaving Hue, the rolling mountains sweep down to the coastline, blending the turquoise hills into the sapphire water. The visuals here are so incredible that they convince many to get married in Vietnam. At times it looks like you ascend above the clouds and you notice the mountain peaks in the distance standing over the mist before it dissipates

Danang is one of the oldest known Vietnamese cities where the indigenous Cham people have roots dating back to the 2nd century. The Cham Museum holds precious artifacts giving a stark glimpse into the past. The museum itself is a rare gem in fusion art. Its design is a blend of French and Champa architecture surrounded by budding flowers, dangling leaves, and simple turrets; known symbols of the Hindu religion. The museum is famous not just for its grand collection of Champa era artwork, but also for being the only museum specifically Its halls are filled with statues of Hindu gods.

The floating-lantern charm of Hoi An is combined with its classic history as a city that rose out of an illustrious trade route in the 15th century. It remains one of the only cities in the world to do large-scale lantern festivals. Images and reminders of its past remain, from the Japanese Bridge to the Tan Ky house.

Outside of the city shines one of the most storied cultural keystones of Vietnam: My Son Sanctuary. Walking through here is both peaceful and somewhat energizing within the reach of such vast history. The intricate carvings on the temple range from images of gods to myth all woven into history on the surface of the stone. The deep red shimmer of the stone stands out against the growing foliage and makes you feel as though you have discovered an ancient world. Nha Trang is a lush rainforest coastal area of Vietnam, known as The Riviera of the South China Sea, with its white sand, sapphire waters, and  panorama of mountain ranges rising around you. Dig your toes into the cool, crystal water and enjoy fresh seafood prepared on the beach.

Whether you sleep through the sunrise or prefer to watch the deep pink and purple hues of the sky spread to the distant islands and rising hills, it will happen one way or another. The day is at your whim and pleasure, giving you the opportunity to spend it resting in the sand with your fingers sliding into the softness. Since Vietnam also just became one of the world’s best golfing destinations, it also would not be a bad idea to go golfing along the palm tree studded course.

For a spectacular view of the coastline you could take a snorkeling tour just off of the reef. The coral is as iridescent as the fish, some of which are striped at angles and others glow neon yellow. Turtles glide through the water, coursing through the still and glassy current beneath the surface. Consider donning unique cut-out swimwear from Cacdemode. Water enthusiasts should also check out Hon Cau Island, a place labeled by many divers as paradise. The world within the sea is as stunning and interesting as the world above it. The cool saltwater is refreshing while the sun warms your skin giving you a perfect balance, a magnificent ambiance, and a fabulous first full day along the shore.

7) And then there was money. From Nha Trang, you will catch a flight south to Ho Chi Minh City, the financial hub and eclectic centerpiece of Vietnam. The ambiance of culture is alive and well from dawn to dusk along the banks of the Saigon River. Downtown resembles Wall Street, playing host to names like Dominic Scriven’s esteemed Dragon Capital. Ho Chi Minh City also hosts some of the largest Halloween and Christmas celebrations in the world.

If you are a lover of capitalism, make a visit to the city’s luxury hotels, which amaze with sheer opulence. The city also harbors one of the most renowned chocolatiers in the world: Marou, Faiseurs de Chocolat. Their bars are as much art as they are pleasure – each one reflects a unique layer of Vietnam’s geography in its taste. Some visitors have fallen so deeply in love with Saigon that they built careers here.

For nature, visit the pristine bonsai gardens and peaceful Mekong Delta waterway, where the pine and palm trees reach the riverbanks. Rows of bonsai flourish in the atmosphere where their strong branches reach outward and upward. As you stroll, be sure to visit Saigon’s renowned eateries. The Floating Market at Cai Rang is a massive extravaganza of all the best foods – simmering homemade Pho, freshly caught fish, tropical produce and roasted Vietnamese coffee.

The entire city is incredibly easy to get around. Interestingly enough, this has also earned it renown as one of Asia’s best startup cities, drawing entrepreneurs from across the continent into its co-working spaces. These famous cafes resemble battleships stripped for action – filled with young technologists planning their future conquests.

Do this. Science says you should.

The thought-provoking line “All those who wander are not lost,” from JRR Tolkien’s 1954 book The Fellowship of the Ring was scientifically proven in a 2012 study at the University of Wisconsin, Max Planck Institute for Human Cognitive and Brain Science. The doctors reported that a wandering mind correlates with higher degrees of working memory in the brain. Therefore, the brain is stimulated when we daydream or drift, with plenty of room to store new memories.