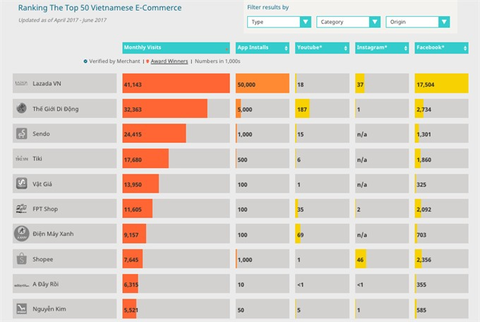 Local firms in Vietnam are winning the loyalty of consumers in online e-commerce sales, an interactive study conducted by iPrice has revealed. Eight of the 10 biggest e-commerce merchants in terms of traffic are Vietnamese firms.

The study, conducted from April to June this year, compared 50 e-commerce websites in Vietnam in various parameters including traffic (based on Similarweb), application downloads and social media followers.

The survey found that the local firms are already familiar with Vietnamese customers such as The Gioi Di Dong (Mobile World), Sendo, Tiki, Vat Gia, FPT Shop, Dien May Xanh, A Day Roi and Nguyen Kim.

Lazada and Shopee, who are operating across South East Asian countries, are the only international firms in the top 10.

The three biggest e-commerce websites in Viet Nam are Lazada, The Gioi Di Dong and Sendo which have strong parent companies backing them. While Lazada was bought by Alibaba, Sendo is under the umbrella of FPT Online and The Gioi Di Dong has been a popular retail brand in Viet Nam for more than 10 years.

Many international companies find it challenging to enter the Vietnamese e-commerce market. With Zalora and Ebay withdrawing from the competition, the marketplace now becomes a playground for strong local players.

Meanwhile, Lazada, The Gioi Di Dong and Shopee are the top three with the highest number of followers on social media sites such as Facebook.

International firms dominate Facebook games due to the numbers of followers from other countries. Local firms, which have the highest number of Facebook followers, are The Gioi Di Dong, FPT Shop, Tiki and Sendo.

On the Youtube channel, the top three e-commerce players are CellphoneS, The Gioi Di Dong and Dien May Xanh. The top three winners are tech and gadget merchants as Vietnamese consumers prefer to watch product review videos as a reference before buying technology and electronic gadgets.