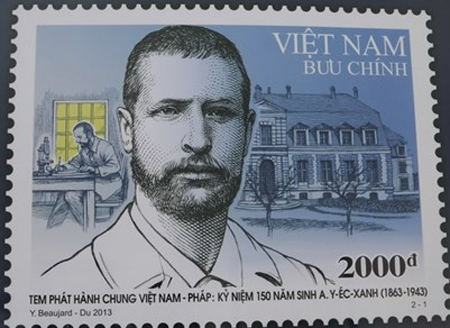 French doctor and bacteriologist Alexandre Yersin (1863-1943) who founded the Medical School of Ha Noi in 1902, is remembered as the co-discoverer of the bacillus responsible for the bubonic plague, which was later named in his honor. Dr. Yersin devoted the majority of his life to Viet Nam.

If you ask people today who Alexandre Yersin was, hardly anyone will know his name, and yet the Swiss-born researcher was an outstanding personality whose life reads like an adventure novel. Alexandre Yersin was a bacteriologist, physician, explorer, adventurer, ethnologist, mariner, farmer, geographer and astronomer. In short, he was a restless seeker with an irrepressible curiosity and blessed with an extraordinary intelligence, who had dedicated his life to science. As the plague raged in Hong Kong in 1894, France sent Dr. Yersin, the pupil of Louis Pasteur, to study the pandemic locally. Only 31 years old, Yersin discovered, in just three weeks, the bacillus causing the plague, and was able to isolate it. The discovery of the plague bacteria established his worldwide fame in the scientific community. The bacillus was named after him: Yersinia pestis.

The Lam Vien plateau in the central highland province of Lam Dong that he discovered and built up, is now home to he city of Da Lat. He is also well remembered in southern Nha Trang city where he lived for more than 50 years. After his death, following the country’s independence, streets were named in his honour, and his tomb in Suoi Dau region was graced with a pagoda where rites are held to honour him.

Yersin’s house in Nha Trang is now the Yersin Museum, and the epitaph on his tombstone describes him as a Benefactor and humanist, venerated by the Vietnamese people.